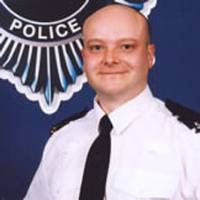 Tennyson Obih, aged 29, of Winsdon Road, Luton, had previously pleaded guilty to manslaughter due to diminished responsibility but was found guilty of murder at Luton Crown Court today, March 24, by a majority verdict.

He must now serve a minimum sentence of 25 years behind bars. 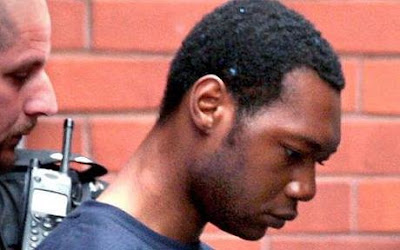 The killer should never have been in Our Country
Speaking after the verdict, senior investigating officer Det Insp Alan Postawa of the Bedfordshire and Hertfordshire Major Crime Unit said: "Although this appears to have been a straight forward investigation from an evidential point of view it has been a very emotional investigation for all those involved.

"I would like to pay tribute to Jon's widow, Mary, who throughout this investigation has shown great dignity and courage, and also to the victims and witnesses who have during the past two weeks had to re-live the tragic events of that day." Ben Kinsella
June 2008
It was found among his possessions following his death in north London on Sunday.

Describing an attack startlingly similar to the one he suffered, Ben wrote: "I've been stabbed, three times in the chest, twice in the back, once in the gut for good measure.

"The pavement feels so very cold on my so very punctured back. Everything feels cold. Numbness persists. As I stare up at my killer-to-be he feels not the slightest measure of remorse at what he has just committed. Instead his dark smile sickens me in ways I couldn't imagine."

Ben wrote of falling victim to "the monstrosity society has become" and described being surrounded by his loved ones in hospital, yet feeling like the "loneliest person in the world".

Then, describing his emotions in heaven, he said: "I just feel free. Free from anger, worries, anguish and pain."

Police believe Ben, who once appeared in ITV drama The Bill, was an innocent victim of a fight which spilled from a pub in Islington on to the streets outside.

It was sparked when a group of underage youths were evicted from the Shillibeers bar just before 2am on Sunday. Ben was knifed several times in the neck and the chest, possibly by four separate young black attackers.

He bled to death in the arms of his friend Louis, the son of Birds of a Feather actress Linda Robson.

Ben's grieving relatives read the essay after his death, and decided to make it public.

In it Ben, who was described as "extraordinarily talented" by his teachers, wrote: "I can only wonder whether I deserve to die here, now. Was it all for a reason? Who can say?

"As my mind becomes inflamed with questions I can only feel the pain pass over me like a shadow. Blood escapes my wounds. Blood once destined for greatness now seeps into the drains."

Later on he said: "I knew I was gone and couldn't ever come back. I just wished I had the strength to say goodbye. I was dead now."

Ben then described meeting his grandfather, aunties and uncles in heaven.

He ended the essay by writing: "This is my home now and I've never felt better. I'm not scared any more. There's no weight on my shoulders, no struggle.

"I'll never say I'm glad he did it because, well, I'm simply not. But I much prefer it here than being stuck on a weird world." 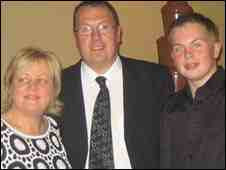 Gary Proctor, 47, and son James, 16 died
August 2008
A drink-driver who killed a father and son in a motorway crash was performing a sex act on himself minutes before the collision, a court heard.

Imran Hussain was driving at speeds of up to 120mph minutes before he ploughed into the back of a Fiat Punto carrying the Proctor family, from Wakefield.

Hussain, of Bradford, was jailed for eight years at Manchester Crown Court.

The 32-year-old, of Como Avenue, pleaded guilty to two counts of causing death by dangerous driving and one count of driving with excess alcohol at a previous hearing.

The court heard that Hussain's erect penis was exposed when motorists came to his aid after the crash.

A TEENAGE Harry Potter film actor was murdered over a dispute involving an alleged mobile phone theft, according to a friend of the victim.

Rob Knox, 18, died in a street attack around 1am outside the Metro Bar in Station Road, Sidcup, Kent.

Four other men were also injured. One was stabbed in the head.

A youth, who asked not to be named, said: �I was in the pub with Rob last night so I know exactly what happened. I was a friend of Rob and his brother Jamie. I wasn’t drinking with them but I see them and I chatted to them during the night before the stabbing.

"One of Rob’s mates had his mobile phone stolen last week and he accused a black bloke in the bar of taking it.

"There was a bit of trouble at the time but nothing serious. Then last night, earlier in the evening, this black bloke was in the bar again and Rob’s mate went up to him

"The black bloke went off and said he would be back. We knew there was possibly going to be some aggro but we never expected anything like that.